The effect of red yeast rice on cholesterol can be effective, but there are some important things to be aware of before if you decide to venture down this road.

Besides learning more about the relationship between red yeast rice and cholesterol, on this page you will also read about:

All these questions and more are answered on this page with research-based facts about red yeast rice and cholesterol. 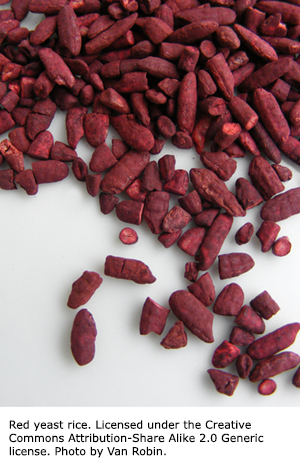 Red yeast rice can be obtained from rice that has been fermented with a special type of yeast known as Monascus pupureus.

The Chinese have been using it for many centuries as a traditional remedy, and it has been popular throughout the rest of Asia as well. You can actually use the substance as a coloring for your food, as a preservative, or as an additive.

The ingredients that are believed to help control your cholesterol problems include:

Is Red Yeast Rice a Drug or a Supplement?

Well, briefly put, it depends on the amount of monacolin K present in the red yeast rice. The FDA has decided that if a red yeast rice product contains a “substantial amount” of monacolin K, then it is considered an unapproved new drug, not a natural dietary supplement.

Monacolin K is also called lovastatin and is used in prescription drugs. But since red yeast rice is actually a natural substance, it may also be seen as a natural supplement. Hence the confusion.

The FDA has actually asked that red yeast rice products that contain “substantial amounts” of monacolin K to be removed from the market, as they will also automatically thus contain lovastatin. However, despite this withdrawal, many people continue to bring red yeast rice back from their overseas travels, or they just buy it online in order to obtain the benefits without having to take the medications.

Now the question has to be posed, “Does red yeast rice lower cholesterol, or is it all a hoax?”

The answer to that question … it may depend!

Remember that the main ingredient (monocolin K) that works in the red yeast rice is lovastatin, which is the same ingredient that is contained in statins. Statins are drugs that are prescribed by doctors to help control cholesterol, and it is effective at lowering both triglycerides and LDL cholesterol in the blood.

The Risks of Red Yeast Rice

Many people have also found that their gastrointestinal system has also been affected by the red yeast rice.

These are only a few minor risks of the red yeast rice, but there are some major side effects that will be discussed in the next section.

There are some FDA warnings that tell people not to sell the red yeast rice on the internet, as it can be dangerous. However, many of these warnings have been ignored, and you may not be able to get a safe dosage of the supplement if you buy it online. Most doctors will recommend that you get the prescription drug, as that is the best way to be sure you are getting a safe and effective dosage of red yeast rice.

The risks above are serious enough, but did you know that lovastatin – just like regular statins – can have serious side effects?

One of the main effects that these statins have is causing muscle weakness. The statins can cause a very serious muscle condition rhabdomyolysis, and this can lead to the breaking down of your muscles, and possibly even to kidney failure. There are a number of muscle related problems that can be caused by taking statins, but these problems may not show up for as long as 4 years after the statins are used for therapy for the first time.

In addition, the statins and lovastatin can actually interact negatively with a number of other drugs, such as those used to treat infections, antibiotics, antidepressants, and other medications that work to lower cholesterol. If you are taking these medications, it is important to check with your doctor before taking any red yeast rice that contains lovastatin.

Taking the correct red yeast rice dosage ensures that you get just the right amount of lovastatin in your body. Too much can increase the risk of the side effects, while not enough will usually be far less effective than you had hoped for.

One study found that 2.4 grams of the red yeast rice on a daily basis helped to cut down the total cholesterol by 16% and LDL cholesterol by as much as 22%. All of this in just 12 weeks.

Another study revealed that taking 1.2 grams on a daily basis helped to cut down LDL cholesterol by as much as 26% in only 8 weeks.

However, most doctors recommend taking only 1.2 grams of the red yeast rice per day, with only 7 or 8 milligrams of lovastatin being contained in the rice. This will ensure that there is not too much of the lovastatin ingested, but that enough is consumed to actually have an effect on the cholesterol.

However, The Panel on Food Additives and Nutrient Sources added to Food (ANS) takes a very cautions stand and says that “the Panel was unable to identify a dietary intake of monacolins from RYR [red yeast rice] that does not give rise to concerns about harmful effects to health, for the general population, and asappropriate, for vulnerable subgroups of the population.”

So if you are planning on trying red yeast rice, do check with your their doctor beforehand, as red yeast rice act like drugs. Make sure to ask your doctor what the recommended red yeast rice dosage is according to your physical condition.

While supplements and medications can be effective, eating right can also be very effective. Want to know how to lower your cholesterol with the right diet? Here are some things you need to know about cutting down on cholesterol and triglyceride in the food you eat:

This cholesterol and triglyceride lowering diet is very effective, and will help you get rid of all the junk in your body as naturally as possible.

Fish Oil and Cholesterol: The Natural Benefits of Omega 3

How to Use Niacin for Cholesterol Lowering: Guidelines and Recommendations

Niacin and Other Cholesterol Lowering Supplements – Which Route Is for Me?

The Pros and Cons of Cholesterol Meds: Taking Cholesterol Lowering Medications for Your Health